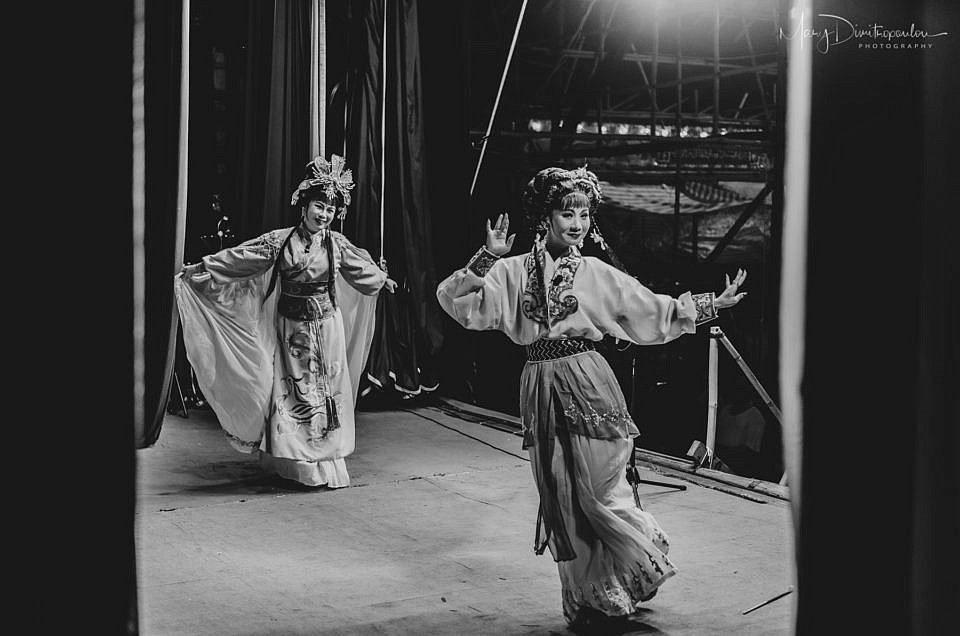 Chiuchow opera (潮劇) – as it’s widely known in Hong Kong, is one of the many variants of Chinese opera. It originates in southern China’s Chaozhou region. Based on the folk dances and ballad singing of the region, it formed its own style under the influence of Southern opera, one of the oldest Chinese operas that originated in the Song Dynasty (960-1279).

Other names for Chiuchow opera is Teochew opera (Teochew-hee 潮州戲) or Chaozhou opera. It is a synthesis of drama, music, singing, poetics, acrobatics, colourful costumes and folk art – and the highest expression of the Chiuchow culture. It is found mainly in eastern Guangdong, southern Fujian, Tianwan, Hong Kong and Southeast Asia. The art form usually emerges during key religious events such as the Hungry Ghost Festival. Although in 2006, it was formally listed as part of China’s National Intangible Cultural Heritage, Chiuchow opera is a fast disappearing trade that few understand and even fewer practise.

I first went to one of the outdoor performances during the Hungry Ghost month in 2017 and since then I was really hooked. By the colorful costumes, the graceful tunes, but mainly by the lovely performers that visit Hong Kong every year in an effort to spread (or at least maintain) this tradition. This year in particular I was extremely lucky, as I met a young lady not only with the same (if not more) passion for Chiuchow opera as the one I’ve cultivated through the past years, but also an expert in this field as she is doing her Master degree in this subject. With her help, I managed to get some valuable information about the groups that visit Hong Kong each year to perform.

Although watching the opera is very pleasing – even for me who as a foreigner I get less than 1% of what’s happening on stage, I believe the best you can take of it is when you are backstage. I always try to get to each site early, when the performers are getting ready. My favorite images come from when I capture all these small moments: When the actors wear their makeup (in a way that many professional makeup artists would get jealous!); when they carefully pick and wear their elaborate and delicate costumes; when they try to relax just moments before they go out on stage;  when they quickly light up a smoke in between the different acts. Backstage, hidden on the two sides of the stage are also the musicians. They tune the singers with their live music and give the rhythm of the whole show.

This year I visited three of the locations where the open air opera performances were being held: Kowloon City, Shatin and Cheung Sha Wan. The extreme heat (quite usual in August for Hong Kong) combined with the humidity, didn’t make my life any easy while shooting at these places. But seeing the actors wearing layer after layer after layer of their fancy clothes I definitely thought I’m super lucky in my t-shirt and shorts!

The most impressive thing is that these groups sleep on site throughout the opera days. Usually, each location has one performance for 3 consecutive nights. During this period the actors live on site, backstage, in makeshift tents, in between their costumes and props. When I asked why is that, I was informed that the reimbursement they get does not justify an amount to be spent for accommodation in a hotel – especially in the super expensive Hong Kong! I really and truly admire these groups, as they seem to love what they’re doing – and I can certainly tell you they don’t do this for the money!

I could go on and on about this cultural gem, but I’ll try and let my photographs do the rest of the talking. Enjoy!